American Cafe Racers
Mike Cook's SuperManx is a blend of all the best! Nicknamed “The Left Coast Limey' because of his British heritage, Mike Cook is busy working his way to the top of the custom motorcycle industry. Like the bike he has created, Mike is a combination Anglo-American. Born in England in 1963 Mike enjoyed an upbringing in a country with a rich history of motorcycling and motorsports. His father constructed his own racing cars and the family spent many weekends on trips to all the race circuits around the country. Mike started building and modifying Karts and Motorcycles at an early age and quickly developed a reputation among his peers as the top “wrench” in the area, even though he wasn't old enough to get his license. By 15 he was the mechanic for the British National Karting Champion. In 1980 the Cooks moved to Kansas City in the United States. Mike adapted to his new life by building the potent Yamaha TZ750 engines for a local racer and continued building and modifying his own bikes. The home garage housed a constantly changing lineup of machines needing his attention but Mike seemed to have a particular interest in the bikes he remembered seeing in England. He continued his work in the local speed shops and honed his skills building engines, welding,designing and making custom parts. He restored several vintage racing cars for area enthusiasts and supported them at race meetings around the country. In 1990 Mike was invited to join Toyota Racing Development (TRD) building engines for their sports prototype race team, owned by Dan Gurney of All American Racers. Their first win came with Mikes engine. He stayed with TRD for three years and two IMSA championships. In1992 Mike joined Cosworth Racing as an engine builder and special tools designer. He taught himself CAD/CAM designing and machining, and studied design at Pasadena Art Center College of Design. In 1999 Mike accepted the position of CART race engineer also for Cosworth Racing. He traveled the world and helped develop the sophisticated electronics systems necessary for top-level competition. Famous CART drivers, amongst them, 2 time Championship winner Jimmy Vasser, Canadian Alex Tagliani and American Alex Baron benefited from Mikes work. During his 10 years at Cosworth Mike continued to indulge his motorcycling interests by building bikes and collecting ideas and concepts for the future.

Wanting to follow his true passion and design motorcycles, Mike took the job as head designer /special projects supervisor for Jessie James of West Coast Choppers, motorcycle maker to the stars. Besides building bikes for Kid Rock and Keanu Reeves, Mike was heavily involved in several special projects, having just recently designed and built the $250,000 Honda Concept Bike featured on the cover of Cycle World magazine. Mike also advised on engineering issues and problem resolution. During his time at WCC Mike started designing and building the Supermanx at home in his garage. He built his own frame jig and fixturing as he progressed with a mind towards the future. Once the bike was finished he decided to leave WCC to dedicate himself full time to his company - American Café Racers. Yeah, we finally did what we threatened to do back in 2001. We made a rear fender and front shorty and a seat cowl to let the regular Bonnie run with the Thruxton...stylistically October 2002
Cafe Racing News
Bernard Li, a California businessman has unveiled no less than four prototypes to resurrect the Vincent motorcycle! Kudos to Li, it's a classy move to bring the old marque back. Check out the news on the Vincentmotors website. 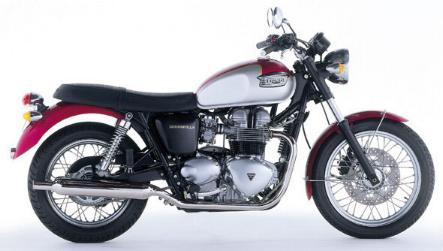 Allright, allright. It's not really news, but our graphic treatment to it is. We are talking to a glass manufacturer about making a seat/rear-section to make the new Bonneville look more like........... 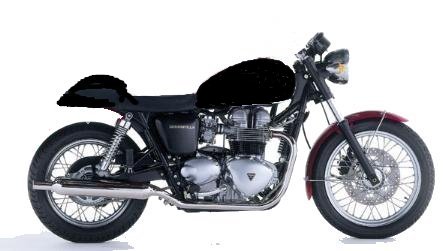 We'll keep you posted. We will also be selling some great fiberglass parts for those vintage bikes. Go see the store. 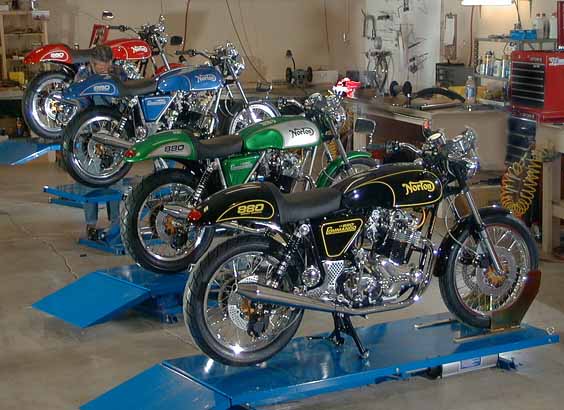 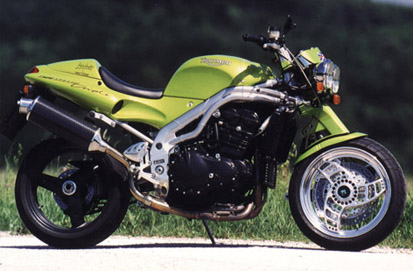 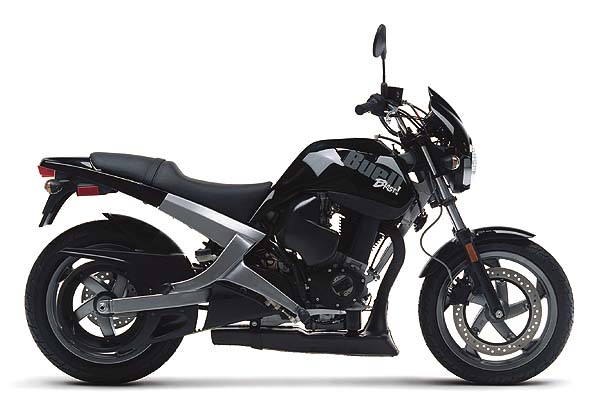 A new single cylinder Thumper! The Buell Blast is slated to sell for under $4,400! Read about it. 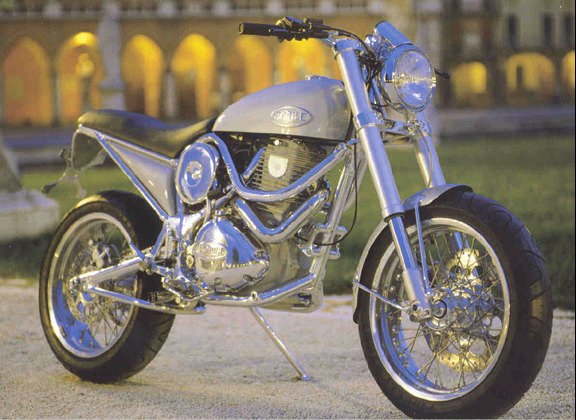 Umberto Borile's dream bike. Stateside in 2001? Read about it.